The One Year Anniversaries Begin

We had already been selected by Millie's birth family.  Millie was in the nursery at our adoption agency.  Carla and I had not slept in many many nights at this point.  It felt as if our whole lives were on pause, like they were waiting to begin in many ways.  We had been chosen, but nothing was final yet.  Nothing would be final until it was final.

Carla and I both went to work in the morning.  We were scheduled to meet the birth family later in the afternoon and we both decided that we could not possibly just sit around the house waiting until it was time to go.  So we both went to work and then met back at home before heading off to the restaurant where we would first meet our adoption counselor and then, with our counselor, go and meet the birth family.

I can't possibly find the words to explain what it felt like that day.  I am not sure that those words exist and if they do, I am not nearly skilled enough to put them together to even begin to hint at what it felt like.  This was potentially the biggest, most potentially life-altering meeting that I have ever had and I had no idea what to expect.  Sure, we had talked to people who had been through it. And yes, we had taken classes on what it would be like.  But this was not something that could be prepared for.  Not for us anyway.

So we met with our adoption counselor first and sat for a while.  When I think back to right before we went over, my mouth gets dry.  That is what I remember feeling most of all.  Dry mouth.  That's weird, right? Of all the emotions going through me, what comes to mind most strongly is that my mouth was unreasonably dry.  But that is what is most vivid for me about those moments we were waiting to meet them.

And then it was time.  We went over to the restaurant where Millie's birth parents were already waiting with their adoption counselor.  We walked up to the table and we met them.  I am not exaggerating when I say that the second, I mean the second, we sat down, all of my anxiety went away.  All of a sudden they were not some faceless birth family.  They were them.  They were real and they were as nervous as we were and they were going through things that I would never even pretend to understand.  And they were so so strong.  They are so strong.  Their love for their daughter was so evident.  It was evident with every word that they said, even when those words were about nothing at all.  And so all that anxiety that I was feeling just sort of went away and we spent the next two hours just getting to know them.

And then we went home.  The next day, they gave us permission to go and meet Millie.  That was something else entirely. Perhaps I will save that for another day.  And then the day after that, we found out we were going to bring Millie home the next day.  And that was the start of all of this.

But one year ago today.  That was when we began this relationship.  For those who have not experienced a relationship like this one, there is no real way to describe it.  And for those who have, you know that there is still no possible way to describe the incredible intricacies that exist within each birth family and adoptive family relationship.  It is complicated.  Perhaps the most complicated thing that has ever existed in my world.

In the past few days this relationship has increased in its complexities.  It has gotten a bit trickier to navigate and yet it is something that will always be there, always be a part of our lives and, more importantly, always be a part of Millie's life.  She deserves this relationship, with all of its struggles and confusions, she deserves all the good that it will bring her.  And so, each day, we figure out a little bit more what this relationship looks like.  Like any other relationship, it will grow and change and we will adapt and grow with it.  If there is anything in my life that has been worth working for, this is it.  And so, I might not always understand all of it, and I might not always know the best way to deal with it, but I will keep trying and working and I know that everyone involved will do the same.  Because in the end, we all just want to do what is best for this little being we all love.
Posted by Unknown at 6:59 PM 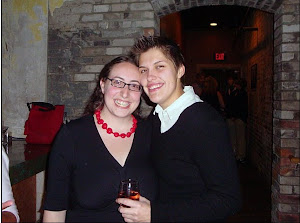